It’s that time again! The one day a year where I see the error of my ways and look at the value of how small and compact things are exceptional instead of focusing on the need for them to be large and enormous. This year I’m looking at a particularly interesting movie which was made by the legendary studio known for creating breathtaking films, Studio Ghibli. Is it as good as some of the other gems in the studios’ library?

Sho is young boy with a heart condition who is sent to live with his great aunt Sadako in the house where his mother grew up. While he’s there he hears legends of tiny human creatures called borrowers who come to borrow things from humans to use in their own lives. One of these creatures is named Arrierty, a young girl who is curious about Sho but doesn’t know if she can trust him either. She will have to find a way to work with him if she has any hope of her world not being discovered by others. 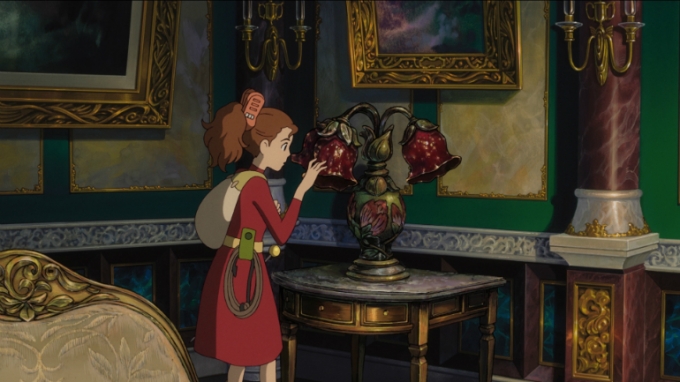 Overall this is a good film.The art is top notch and the story is more down played in comparison to other Studio Ghibili movies. This helps to give the film a sense of distinction but at the same time it also gives it a bit of a disadvantage. When going to see a Studio Ghibili movie people are more interested in the ever expanding worlds full of adventure and wonder. Though the whole, smaller scale making the regular human world look vast is fascinating and presented well, its not as wonderous as the worlds of Princess Mononoke or Spirted Away.

The interactions between Sho and Arrietty are very fascinating to watch. They have a great bit of bonding between the two of them and a true friendship is displayed. Unfortunately, they have the classic “From two separate worlds” story line  which doesn’t get settled in a way which allows them to continue to see each other in the end. Its a bit sad but not entirely tragic either.

I don’t know how accurate this is to other adaptations of the Borrowers as I haven’t really seen any or read the original novel. The closest I have come is watching the cartoon version of The Little’s back in grade school but that’s another series all together. Still, as a movie on its own I believe this is a more faithful and fun adaptation than the Tales of Earthsea was.

The Secret World of Arrietty was good but unfortunately not many people saw it. It was another box office flop and which eventually helped contributed to Studio Ghibili now being in its current state. On standby and not really releasing anything major until founder Hayao Miyazaki decides he wants to do another film.

4 thoughts on “The Secret World of Arrietty”