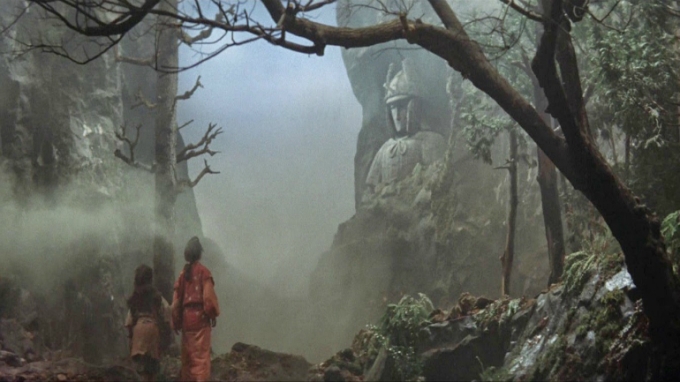 Today’s movie tells of a monster which doesn’t get a lot of respect in the kaiju community. Sure those who know his name know how important he is and how good these movies are. For those who don’t pull up a seat as I tell you the tale of the mountain god known as Daimajin.

The peace of a town is thrown into turmoil when Samanosuke the chamberlain to the Feudal Lord decides to overthrow his master and take control. The Lord’s two children Prince Tadafumi and Princess Kozasa manage to escape with the help of a samurai named Kogenta. He takes the children to a cave near where the mountain god statute, Daimajin sits. Ten years pass as the children grow up in isolation from the rest of the world and Samonosuke has enslaved the people for his own ambition. When her brother and Kogenta are taken hostage, Kozasa is left with no option but to pray to the ancient statue and hope for a miracle. Luckily, her wish is answered as the statue comes to life and sets forth on a path of divine justice. 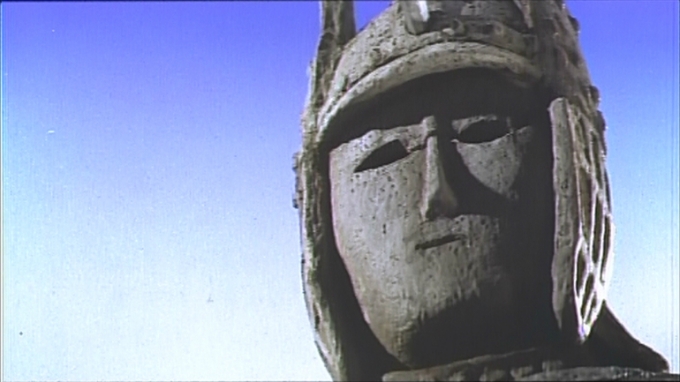 One of the most noticeable aspects of the film is it being a period piece. It takes place in ancient Japan where the country is still ruled by Feudal Lords who have samurai to enforce the laws. This also means the ways to stop Daimajin when he comes to bring his wrath are limited to what the people had in such a time. Ropes, hammers, and a few rifles are all they have at their disposal to fight against the magically possessed statue. It’s very interesting to see especially compared to other films where after a giant monster appears the audience finds themselves waiting for the army to show up to try and fight against the creature.

The scenes with Daimajin are the most striking and memorable parts of the movie. Moments like when the villains try to break his stone sleeping form to when he awakens to punish the wicked are very impressive bits of special effects which really help to make the movie distinct. Also, Daimajin has powers which he uses to extinguish flames and even travel great distances by turning into a comet. These more practical effects still retain their impressiveness even today. 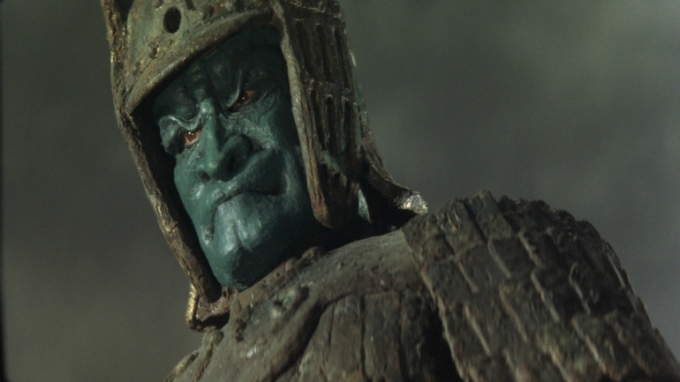 The one glaring problem with this film is its ending. It wraps up far too quickly. A little bit more of an ending showing how the people are able to recover after their time being under the harsh treatment of the bad guys would have been nice to see. Also, Daimajin waits a very long time before finally awakening to offer aid, a trend he will carry throughout the entire trilogy. The people need saving buddy, wake up a bit sooner.

The Daimajin trilogy is a very good series which all fans of giant monsters need to check out. I’ll work on getting through the rest of the films later in the year. For now, just wait and if things get bad, ask some large stone samurai statues for help.