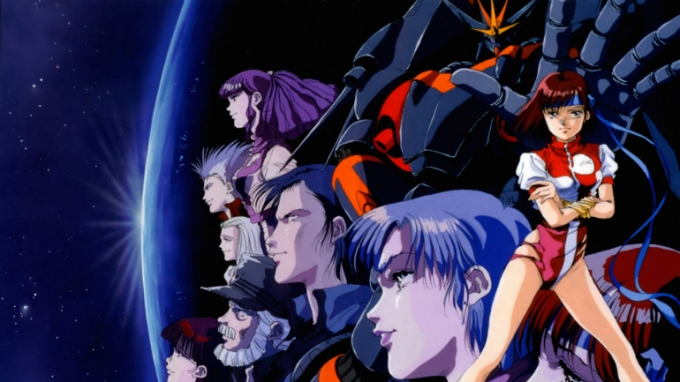 Gainax as a studio has found a way to become one of the most recognizable companies in the anime industry. Thanks to their efforts titles like Gurren Lagann and Neon Genesis Evanglion exist. Let’s take a look back at what started it all. Their first mecha series, featuring one of the biggest giant robots in existence, The Gunbuster.

The world has been attacked by an alien race known as the Uchuu Kaijuu. Now training to fight against them starts at the High School level where students are prepare to pilot giant robots. Noriko Takaya, the daughter of an infamous Admiral in the Space Forces aims for the top and to hopefully prove herself to be worthy to pilot a robot. With the help of a member of her father’s crew, Coach Ohta, Noriko will acquire the skills necessary to be able to save the world. All while wearing her gym shorts.

This series is well remembered thanks to three aspects: the mecha, the character development, and the scientific facts incorporated in it. The robots in the series are iconic. The Gunbuster itself is known for its iconic design, it’s insane height, and it’s incredible firepower. How big is the Gunbuster? Whatever giant robot your thinking of, the Gunbuster is bigger than it. The Gunbuster is also known for its incredible firepower. This thing is able to destroy an entire alien fleet on its own without backup.

The series also has a surprising amount of character development in it for a series made up of six OVAs. Noriko struggles with her abilites to properly pilot a robot and if she will actually be able to fight properly for humanity. Her rival, Kazumi falls in love with Coach Ohta but Ohta himself can’t fall in love because of his past. All of these issues are addressed and developed in a proper manner in only six episodes. Some 24 episode series don’t get achieve this.

The series also has a large amount of science behind it and it makes a point to properly address scientific issues such as how the crew must clean laser lenses so they can fire better or how much time passes in space travel compared to how much time passes on earth. Also, there are some very funny omake (extra episodes) which feature actual scientific lessons with the characters in chibi form. It’s adorable and one of the best omakes ever created for any series.

The series is also known for its last episode. Thanks to a lack of money for the finale, the series was made completely in black and white. Also many action sequences were thrown out in favor of showing numbers on the screen for the amount of humans killed and how many ships were lost. Yes, this is was a cheap way of  presenting the episode but at least the episode got made and a proper ending for the series was given.

Despite all its short comings, Gunbuster still has some great moments in it and allowed Gainax to always look back at an incredible series as they keep moving foward. It is a required series all fans of Mecha should watch. The sequel, Gunbuster 2, not so much. One of these days I’ll get around to watching it.