My original intent with the Gundam Franchise was to do some kind of month long celebration. Unfortunately, I find myself out of time and in need of pulling something out of the reserves. So, here it is, my first of many Gundam reviews. Not as elegant as I thought they would be but at least I’m getting them out. Today we will begin by looking at the show that started it all, Mobile Suit Gundam.

As people leave Earth to start a new future in space colonies, the Principality of Zeon announces their independence and begins a war with the Earth Federation. As war between these two forces spreads, it soon comes to the peaceful colony of Side 7 which has been secretly developing mobile suits for the Earth. The son of the chief designer, Amuro Ray finds the manual for the new machines. Hopping into the cockpit of a suit called the Gundam he is is able to fight off the invading Zeon forces. Now thrown into war Amuro will find himself having to soldier on with piloting the Gundam to protect the new war ship the White Base and the friends he has on board. Unfortunately he will also have to face the ace pilot of the Zeon Forces, Char Aznable, the red comet.

The original series set the themes that would become synonymous with the franchise. Themes such as war is hell, human nature won’t change once we are in space, the enemy is a person too, and intense giant robot combat would echo in the different series that would follow. The enemy is a person too was probably one of the most unique aspects of the show. Before this the enemies in mecha shows were members of evil organizations whose only goals were destruction and mayhem. There are moments where individuals from both sides were shown as being just people who were fighting to survive or to advance but under different circumstances may have been friends with those from the other side. The staples of the franchise would be introduced in this series as well. The cylinder space colonies called sides, the giant robots called mobile suits, and those with mental powers called Newtypes that would be a regular occurrence for the series all originated from this show. 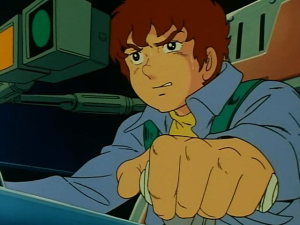 The mecha of this series are iconic. The original RX-78 Gundam is such a recognizable part of the Japanese culture that a life sized state of the machine has since been constructed in Japan. The Zaku-II and various others suits of the Zeon forces had such a unique design that it helped to cause the fans to obtain a close bond with the enemies. Sadly it was the extreme variety that I feel led to the Zeon’s defeat. If they had only found a single mobile armor they could have mass produced instead of having so many prototypes that were defeated on their first appearance they may have had a better chance at victory. A fleet of Big Zams would have helped them to win the war.

The two main characters of this series, Amuro and Char really are two characters from opposite sides and I don’t just mean which team they are fighting on. Amuro is a man who never wanted to fight but once in the war discovered he was a natural prodigy for combat. Meanwhile Char used war to his advantage to exact his revenge and fight for his own personal agendas. Yet throughout the series the two go toe-to-toe causing their skills and their blossoming abilities as Newtypes to increase exceptionally. Their rivalry and relationship would continue through not only this show but also through Zeta Gundam and Char’s Counteracttack. 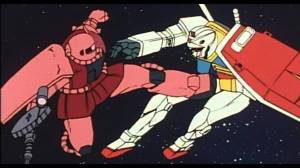 Despite the influence and impact that this show has made in the anime community its not without its flaws. For starters the show’s animation has not aged well and is hard for some fans to sit through. This makes the series not as easy to approach for those who aren’t used to older animation. Also the series did suffer form cancellation and its ending does wrap up a bit fast. Still, these problems don’t make the show totally unapproachable. And any true Mecha fan should find the time to sit down and watch this classic anime series all the way through.

And that’s the original mobile suit Gundam. The show that launched a plethora of sequels and spin offs.  Stayed tuned Mecha fans for more. Until then, FLY GUNDAM!!