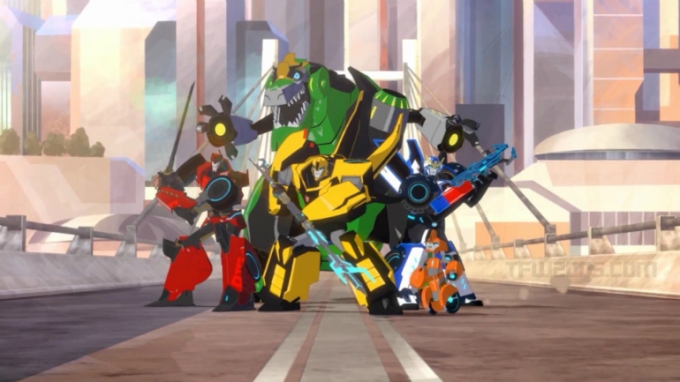 I originally wanted to wait to review this series when I finished going through all the seasons of its predecessor, Transformers: Prime. Now with the second season’s upcoming premiere I decided to do a special review in honor of this show’s return. Let’s “Rip it up and Ride it out”…hey it took Bumblebee a few times to get it too.

In the aftermath of Transformers Prime, Bumblebee has begun mentoring a young security officer and helping to rebuild Cybertron. All this changes when Optimus Prime sends him a message telling Bumblebee he needs to head to Earth. Using a space bridge, Bumblebee arrives on Earth and discovers a crashed prison ship and the captive Decepticons have escaped. Now with the held of of his student, Strongarm, a delinquent named Sideswipe, a Dinobot named Grimlock, and a malfunctioning minicon named Fixit, Bumblebee must work to track down these Decepticon fugitives and bring them to justice.

The series picks up where Transformers: Prime left off and does help to give Bumblebee his own focus. There isn’t much focus on Cybertron after the first episode. It would have been nice to see what other characters were doing and what changes had been made to the planet now that it is inhabitable again. Hopefully this will happen more in season two. Of course, it does go into some new explanations about the Tranformers Universe by introducing the Realm of the Primes, where the former Primes reside.

The major flaw with the series is the set up. The Autobots get a new Decepticon to track down almost every episode in the classic “Monster of the week” formula. Few series before have had more Decepticons over Autobots through the course of its run. Some of these characters do appear later in the season and even form a team of their own so at least they are able to modify the classic formula.

The team of Autobots is standard by the characteristics they bring to the team. They consist of a novice leader (Bumblebee), the strict rookie (Strongarm), the loose cannon (Sideswipe), the wreaking ball (Grimlock), and a medic (Fixit). Not that the show isn’t able to tell good stories with these characters. Seeing Bumblebee mature to the point he is in a leadership position was a welcome sight for his fans. It was also nice to have Grimlock back into a Transformer series, it would have been nice if he wasn’t a dumb knucklehead with a punch first and ask questions never attitude.

The series doesn’t really have any major flaws but at the same time doesn’t do anything as fanatic within the show like Transformers: Prime did. Probably the lack of the darker and grittier tones which were given off thanks to the sleek computer design the previous series was animated with. Still, the show is good and I am looking forward to watching the new show as it airs.