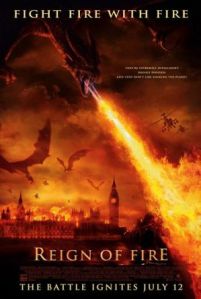 Ah Dragons. These are some of the oldest giant monsters in the history of story telling along with my personal favorite ancient creatures, Dinosaurs. There are many Hollywood movies that have either dragons or dinosaurs making brief appearances in the film but there are also a multitude of movies where these behemoths gets center stage and qualify for entry on this blog. My entry today is the first of many film reviews featuring dragons. I’ll have to work on getting a review of some non-atomic powered dinosaurs in the near future.

When a dragon nest is uncovered in London, Humanity doesn’t stand a chance against them. With their ability to fly and breath fire, humans are barely able to stay alive. Quinn (Christian Bale) is hoping to protect a group of refugees in an old castle but is having a difficult time keeping them safe. Help comes knowing in the form of a military man called Van Zan (Matthew McConaughey) who wants Quinn’s help to fight against the male dragon, who was responsible for killing Quinn’s mom. Together with a helicopter pilot named Alex (Izabella Scorupco) the two of them might just be what it takes to save the world from fire. If they don’t kill each other first. 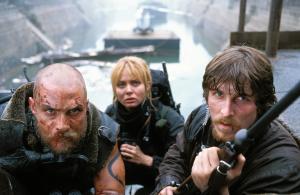 I was told by a friend Wyverns, which is a subset of Dragons. This somehow didn’t set well with her on the rest of the film. Personally though I enjoyed the way the Dragons were portrayed enough that their designs really didn’t bother me. They were primal and unstoppable killing machines that breathe fire. Sure, there are other ways to showcase these creatures such as being intelligent or cunning but for me the look and feel that they had in this film served its purpose. They were better than humanity on almost every level that allowed them to retake most of the world. Sounds like a dragon enough for most people but I can see where the experts might have a problem with it.

The look of the movie really is the selling point of this film. The people definitely look like they have put through the ringer and are doing all that they can to stay alive even for just one more day. We also get great acting from both leading men, who are working hard to portray individuals who are committed to their causes and trying their best to keep fighting the good fight. When they start slugging it out, it becomes hard to tell who to route for. 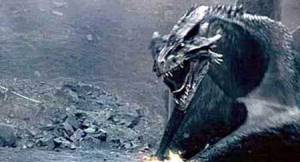 This movie wraps up a bit too fast for my taste. Sure they find a way to defeat the male but I really don’t think that all the female dragons would just go away that fast. Maybe if they had found a special poison or something that would specifically target the dragons and kill the remainders then that would make more sense. Personally I think it would be more like the frogs in Jurassic Park and the lose of a male in the environment would cause a new male to be born into the world through genetics. Also, their weakness of their eyes taking too long to adjust between night and day seemed very weak and an insane amount of time when utilizing it to fight a giant monster. According to this site, both sunrise and sunset last less than three minutes. That’s not the best when dealing with a giant winged, fire breathing cannibal.

All in all its not a bad monster movie to watch but there seems to be a bit too much convenient with this film. Quinn just happens to have a grudge against the male dragon, Van Zan just happens to know a weakness to defeat him, and the rest of the dragons just seem to disappear with the death of the final boss. Its a bit too well timed if you ask me. I mean if killing the male had spread some kind of virus that would kill the females or something I could have bought it a bit more. Maybe I’m overthinking it a bit too much but that’s why I do this blog. So I can overthink movies with a mad man jumping at a dragon with an ax so you don’t have to.