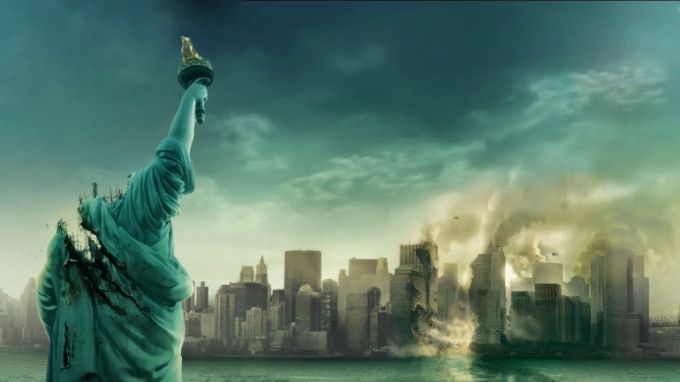 Having a fresh idea when it comes to Giant Monster films is often a recipe for disaster. It usually just ends  with the film being an inconceivable mess with a foul looking monster which sounded great on paper band in drawings but looks like it was made by a kindergartner. There are rare times when a fresh idea such as the use of the “found footage” genre of film mixed with Giant Monsters works out for the best.

Rob is about to take a job overseas and his friends have decided to throw a party in his honor. While everyone is celebrating, chaos erupts as the city comes under attack by an unknown force. As Rob and his friends scramble to escape, they will find themselves trapped by a mysterious blood thirsty creature, known only as Cloverfield.

The film was built on the mystery of “What does the Monster look like? This hasn’t been the best plan as any Giant Monster fan knows. The most prominent example is the Sony Godzilla Film, the Studio tried their best to have a major reveal about what the monster would like alike and people weren’t happy when they got to see it. So why did Cloverfield work and Godzilla not?

There are two really definitive reasons why Cloverfield was successful. First, ti did not carry the expectations which were inherent with a Godzilla film. People were hoping Godzilla would look more like his original form. Their was no expectation with the Cloverfield monster and instead resulted in more intrigue of what it would look like. The second is the destruction the monster caused. Godzilla’s destruction seemed to more accidental from his defensive need to fun form the military. Cloverfield on the other hand decapitated the Statue OF Liberty on its way to the city and from there tore the city apart. It was a more savage and bigger threat and would more than likely beat the Sony made Godzilla in a fight.

The biggest complaint with this movie is its use of the shake camera. The technique has often been employed in action movies in an effort to showcase the intensity of the physical movement on the scree. The camera work in Cloverfield was too intense though and many people complained of experiencing motion sickness while watching the movie. the experience of vomiting probably din’t make this film a favorite of several individuals.

Overall, this was a pretty good film which no one was expecting to be as good as it was. I’m kinda cheating and attempting to get this film done before the sequel comes out in hopes of getting a few more page reviews. Hopefully I will succeed and I will more than likely write up the review of the sequel at the other site I write for, Monkeys Fighting Robots. I’ll let you know if and when I do crew.