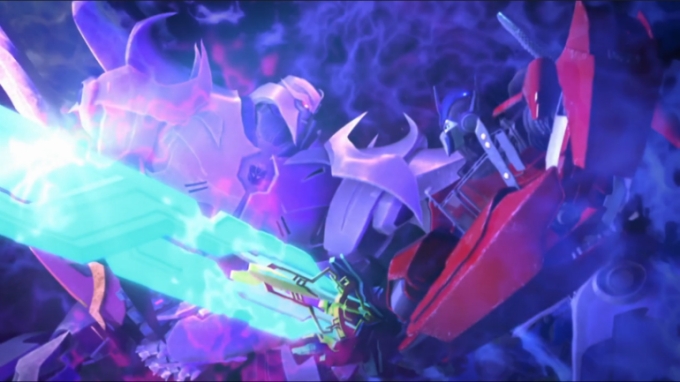 Time to return to another installment of the Transformer franchise. The first season of Transformers Prime was one of the best televisions series ever to bear the Tranformers’ name. Did the second season keep up the strength of storytelling and action?

After the events of the first season, Optimus Prime believes he is his younger self, Orion Pax and he is still friends with Megatron. His comrades will have to venture to their fallen home world of Cybertron to find a way to restore Optimus to his original self. Will they succeed or will Optimus continue to wear a Decepticon symbol on his shoulder?

The quality of storytelling of the previous season stays constant. From the beginning of the season while Optimus believing he is a Decepticon to the quest for the Cyber Keys the drama keeps the audience in their seats episode to episode. The call back to previous Transformers series with items such as the Star Saber and the Omega Lock are excellent ways of using the franchise`s rich cannon to tell a fantastic story. Also, all of the different Cybertronian technology they have recovered over the course the series comes to a head as all seem to play a part in the season finale.

The introduction of new characters help to make the story interesting as well. The Decepticons get Dreadwing, brother of the fallen Skyquake who turns out to be very noble despite being a deadly warrior. The Autobots get introduced to Smokescreen, a young brash solider who has been sent by Alpha Trion, Optimius Prime`s mentor to help with the war. Both of these characters are welcomed additions to the show and really help to flush out the story telling.

This season isn’t without its problems. First up it does contain a clip show (A big problem as this blog is always against clip shows). Second, the show continues with the fetch quests from the previous season. It keeps up the discovery of Cybertron relics before moving to the Cyber Keys. It is a small complaints but still worth mentioning.

This series continues to be one of the best installments of the Tranformers’ franchise. All that is needed is to look at the final season and the movie that followed it. Stay tuned crew. These reviews will be coming down the line but I have another Transformers series I need to focus on this year as it is celebrating an anniversary.