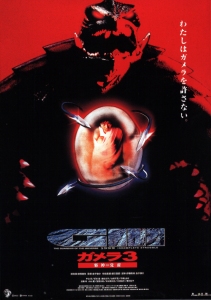 Rounding out a trilogy is a very hit or miss task. For every Return of the Jedi or Iron Man 3 there is X-Men: The Last Stand or Batman Forever to compare it to. After the first two movies were incredible there was a lot riding on the third film in the Gamera Heisei Trilogy to be just as impressive. So how does it stack up?

In a flashback, young Ayana watches helplessly as Gamersa destroys her family’s home with her parents inside during his battle with Gyaos in Tokyo. In the present a graveyard of Gamera’s bodies are found and while he attacks two Gyaos, Gamera ends up destroying Shibuya. Seeing this and still fueled by pain and loss Ayana discovers a baby monsters that she calls Iris. Soon little Iris grows big and is absorbing the blood out of helpless victims for nourishment. Meeting in Kyoto Gamera and Iris have an epic showdown but is the recently discovered grave site a bad omen for everyone’s favorite Guardian of the Universe?

The world continues to spin in the Gamera trilogy and the effects of the previous two films catches up with our characters. Having absorbed Mana to defeat Legion has had devastating consequences causing Gyaos around the world to hatch. The world’s is now in chaos and Gamera is working his butt off trying to keep up. Helping him out we have the return of Dr. Nagamine (who is now a globe trotting Gyaos expert) and Asagi (Gamera’s former priestess and biggest fan). The two women work as a team helping to recruit allies and investigate the claims of a Gyaos mutation (Iris) in efforts to do all they can for Gamera. It’s this incredible attention to detail and world building that make me love the series so much.

A recent viewing of this film reminded me of the insane amount of detail they have done improving upon the characters from the first film. After watching this movie and rewatching a trailer for the first film, it was insane to see all the different changes that the characters went through. The damage the Gyaos go through (especially the one in Shibuya with its eye hanging out) and the more menacing and jagged look that Gamera sports in this film really help to accentuate the darkness and carnage that the film is trying to express. Still, despite his intense new look, Gamera is still trying to do all he can to stop the world from coming under Gyaos’ control. My only major problem is that I don’t get to see the epic fight scene between Gamera and the large flock of Gyaos descending on Japan. That would have been one of the coolest fight scenes ever. Still, I’ve grown comfortable with the way they cap off the story.

If you can’t tell I love this film just as much as the other two and find the entire trilogy to be some of  the best giant monster action that came out of the 90s. The series gave a new sense of respect and power to a character that had been written off as a joke. Watching him especially defend the Universe from the likes of Gyaos, Legion, and Iris is a joy that I will gladly partake in at the drop of a hat. Again, if you haven’t taken the time to watch these films yet, stop depriving yourself. If you are reading this blog then I guarantee you that you will enjoy watching these three films. So ends my discussion of the Gamera Heisei trilogy. This won’t be the last of our green flying butt kicker though. I’ll eventually go back and review his past films and the one that followed this. Still, my fingers are crossed that the new film that will come out in the near future taps into the roots set forth by this trilogy.