A bad sequel is nothing new to any franchise. A sequel that is so bad that people wish it isn’t exist at all isn’t uncommon at all. Few shows are so terrible that they are never referred back to again even when series set after it are made.

Hibiki Kanzaki is a reporter out to find the truth behind the next big scandal and tries to look into ace pilot Silvia Cena. Just as he thinks he’ll never find that one big story, a new race of aliens known as the Mardook invade earth. The new UN Spacy is quick to counter their invasion with their tried and true strategy, the Minmei defense. Unfortunately, these invaders have their own songstresses whose singing throws the pilots into chaos. As Hibiki gets lost in the battle he comes across one of the alien singers named Ishtar and takes her back to Earth. Will Hibiki be able to show Ishtar that human culture shouldn’t be exterminated?

There are a lot of good reasons why this series is not popular with the Macross fanbase and Mecha fans in general. First off as a Macross sequel the show feels very sloppily pit together without much thought on world building (and you reader know I love my world building). This is evident in the fact that despite 8- years passing the Earth still seems to be centered around the decommissioned Macross fortress. Shouldn’t the humanity/zentrati society have redeveloped more of the earth by now? Silvia mentions that her grandmother was Zentrati so that means that it has been many years already but there isn’t many shots of other locations that would help the watcher to know that the world is bigger than the one city that the story take place.

Also can we talk about the the Minmei defense for a second. Why is this the only means of protecting the Earth? I know it can work for when a series has never experienced culture before for shock factor but is that really what they are banking on? Shouldn’t they have created some kind of high tech laser defense grid or something? Maybe had a few different Macross class cruisers on standby just in case the appearance of a malevolent alien fleet appears.

The movie/OVA (not like it matters, neither way of watching this things makes it any more salvageable) does introduce one interesting feature and that is a new Mecha. The VA-1SS Metal Siren is a one mech with the super mode which is cool but seems out of place.Still it is pretty interesting to watch this new machine tear through the battlefield destroying the enemy fleet. 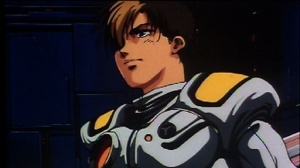 Also to add a cherry atop this crap sundae, they also destroy the Macross. The Macross!? The original, unbeatable fortress is destroyed except for the bridge where Ishtar is singing to reach out to her fellow songstresses and get them to change sides. The power of music protected her and somehow keeps the floating head of the destroyed robot fortress together. Sure, whatever as long as it helps this anime end faster.

If it hasn’t become apparent by now, you should probably not watch this series. I cant even recommend it to the die hard Macross fan as they already have the less than interesting parts of Macross 7 to get through. I still have to sit down and watch that series myself. Might have to watch something else with jets that transform into robots to wash the taste of this out of my mouth.