Time to return to the wonderful world of Macross. I’m looking forward to the new series, Macross Delta but it will  have to wait until later this year. For now we find ourselves still in “retelling” month and looking at a movie which retells the original Macross series and asks the important question, “Do you remember love?”

Out in the solar system, the spaceship, the Macross is out exploring when it is attacked by Zentrati forces. Helping to fight against them is Hikaru Ichijou, a pilot who finds himself falling in love with the young idol named Lynn Minmei. Things get turn upside down when Hikaru and his commanding officer Misa Hayate get thrown from the ship. As they struggle to survive the two grow closer and may have found the way to defeat the Zentradi by harnessing the power of love. 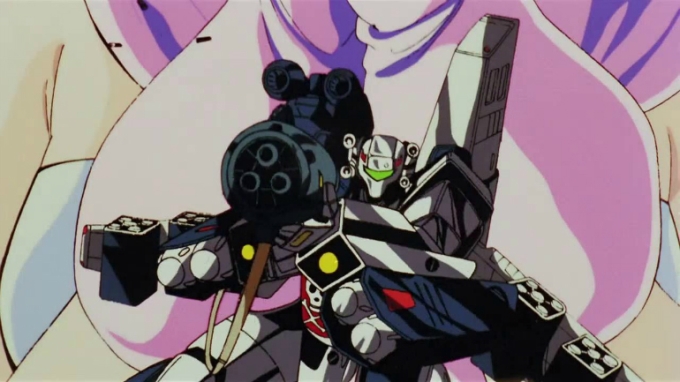 This retelling is a masterpiece that adds a great deal to the original show it was based on and does so while looking so good in the process. The visuals in this movie are incredibly detailed to the point each missile with its vapor trail is lovingly hand drawn (rumor has it if you pause at the right moment you can see they drew one missile as a Budweiser can) and the landscapes are detailed in a way which conveys distress and hopelessness at just the right moments. Its truly a sight to behold.

The characters also have a bit of an alteration from the TV show. Minmei isn’t as annoying as she was in the show and you can feel the struggle with the result of the love triangle between her, Hikaru , and Misa. Also, they managed to squeeze in some time for Mira and Max’s relationship but sadly one character doesn’t have any change and once again Roy Fokker still meets with a very traumatic fate. Why can’t he just stay alive in one version and retire to private sector with Vanessa on his arm?

The movie does have a few plot holes which are never properly addressed.  This has led to questions like “Did Mira shrink or did Max enlarge?” and “Why does an ancient alien song sound like 80s pop?” Still these little nitpicks don’t distract from the overall enjoyment of the movie and has some really memorable moments which mecha fans have been treasuring for years. The film is a quality piece of animation for not only fans of giant robots but fans of anime in general. Now if we could just get a physical media release of it in America. Are we asking too much for that to happen?

Two entries down and two to go on the first themed month. So far the entries have been successful in retelling the series properly. Next week though we find one that doesn’t succeed in properly recreating the feel of the show at all. Look forward to it crew.*

*I’m thinking of addressing my readers as crew. Thoughts? Love it? Hate it? Comment and let me know.

Have you ever talked with an old school anime fan? I mean true old school anime fan, not those who look at Toonami with a sense of nostalgia but those who were fans from before the creation of cartoon network. The three titles these true old schoolers will mention is StarBlazers (Space Battleship Yamata), Voltron (Beast King Golion) and Robotech. the show Robotech is particularly notorious fore being created by typing three series together with no other connection to create s huge spanning universe. Still, its the first arc, the one based on Super Dimension Fortress Macross that people feel the most love for. The reason: Its just so damn good.

After a mysterious craft falls to earth, the governments of the world partake in the Unification War to band together with one goal in mind: To restore the ship that fell from the stars. On the day of its initial launch, Hikaru Ichjiyo, a young stunt pilot is caught into the middle of an alien invasion. Finding himself caught with in the crossfires with this armada looking to use the ship that got away for their own purposes, Hikaru has no choice but to become a soldier and fight to protect his friends and family. Along the way, he develops a complicated love triangle with upcoming idol Lynn Minmay and First Lieutenant Misa Hayase.

It’s really hard to talk about a series like Macross because it is such a milestone series and has had such lasting power in the anime community that there is no denying the hold that it possesses. The series starts strong with an alien ship crashing to earth, continues with incredible mecha fight scenes in space, and rounds itself off by focusing on the intense love triangle that the series became known for. An anime fan that has not seen Macross, is someone who needs to realize they have a lot that they still need to check out. This series is one that must not be missed. 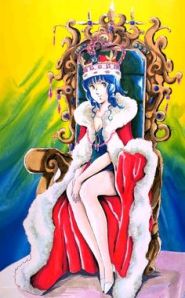 Of course I’m not going to just gush all over this series. I’m aware its not without its faults. Thanks to the American Version of this series, the name Minmay became associated with a very character that was very annoying and unnecessary. Know that is more in the Robotech version of the show and doesn’t truly carry back into the original series. The original voice actress and the Japanese songs were fair more entertaining then the ones that were made for the american audience. If your finding it hard to believe that these songs could be that annoying, just pop over to YouTube and check them out. Trust me, they aren’t exactly something you add to a favorite playlist.

There also is the issue with the additional nine episodes. Originally the series was just supposed to be a 27 episode series. Then the audience and ratings for the show were insane so the studio tacked on an additional nine episodes which really do feel very tacked on. This is especially true considering that in the 27th episode an incredible planet wide battle took place and the most of the Earth was destroyed in the process. Kinda hard to come back after hitting a high point like that.

Despite the drag in the attached episodes, the series is still good and started a franchise that is continuing today. I look back fondly on Macross and would gladly rewatch it if I was blessed with more time in my life. For now I’ll keep remembering love and the importance of protoculture.