I almost feel bad at times when I tell others about the Gamera 90s trilogy. I mean I have proudly proclaimed in more than one occasion to be a huge Godzilla fan but I can’t help but say that these three movies are the best Kaiju films that came out of the 90s. I just can’t help but want to praise these three films for being a cut above the traditional Kaiju genre.  Especially when you take a moment to look back at the comically campy movies the giant turtle was in during the Showa period. Despite that I have a yearly tradition of watching the trilogy and seeing its flaws and problems repeatedly it still holds up as some of my favorite Kaiju movies. Sorry Godzilla.

The film opens with a Japanese Plutonium ship hitting a mysterious atoll while at almost the same time an entire village is destroyed with only cryptic message that “it’s a bird” over the radio. As investigation teams set out to discover the truth behind these events and only to realize that the atoll is the monster Gamera and the “bird” on the island is the deadly creature Gyaos. Believing the Gyaos to be a lost race that needs protection the humans try to capture them whole exterminating Gamera. Meanwhile young Asagi Kusinagi is given a relic that allows her to connect to Gamera’s heart and feel his pain. Together the two most overcome the government’s efforts to protect the wrong monster and stop the world from falling under Gyaos’ shadow.

The modernization to Gamera makes nods to his origins by presenting him as both a destructive force and a defender all in the same movie. By showcasing that he just happens to destroy everything that’s in his way on his path to kill the Gyaos even though he has the best intentions in mind. A recent fact that has been pointed out about this trilogy us that no one ever calls Gamera a turtle. In fact the director has apparently gone on record saying that the idea us that in the movie universe there are no turtles and that is why he is never referee to as such. Interesting little tidbit there. 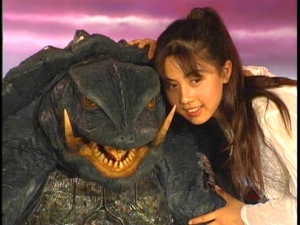 The star of the movie is young Ayako Fujitani in her first acting role shows a lot of devotion for the giant Kaiju. Her devotion puts her on the list of some of the best females in Kaiju series if not one of the best human characters in all of Giant Monster Movies. Also, another interesting fat, she is Steven Segals daughter.

The Gyaos new look for the trilogy is incredibly more menacing then most other evil Kaiju can be. Sure bad guys like King Ghidora or Megalon will fly around and destroy buildings with their blasts but they isn’t nearly as intimidating as a gluttonous monster who has pieces of its victims falling out of its mouth as it struggles to chew. This cupped with the fact the creature can asexually reproduce much like the 90s Godzilla makes them a force to truly be afraid of.

Probably one of my favorite moments in this film is the atmospheric reentry struggle between Gamera and Gyaos. The measures that Gyaos takes to escape from his eminent demise is truly impressive. If you can’t tell by now I highly recommend this film and it’s two sequels which I’ll work on writing up the reviews on soon. Basically if you take anything away from this review know that this blog highly endorses that you see these movie s to call yourself a true Kaiju fan.