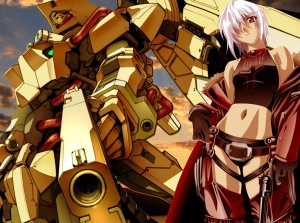 There are times when a series has a great premiere and a great reception only to fade away like dust in the wind. If a series is lucky it’s just that the response wasn’t what the studio or network was hoping for and it was cancelled before truly achieving glory. If the series was at least halfway entertaining then a fandom will grow around theses series and continue to sing its praise. Unfortunately as most are aware, Anime for the most part has a planned out length and get map of the story they are hoping to tell. This means that if a series has a great opening or start to it and their isn’t’ a huge group of followers discussing it and demanding that sequels be made then there is a good chance the series was just not every good in the long run. This was my experience with Burst angel.

My first exposure with the series took place at Acen 2005. I was at my hotel room and a friend of mine had returned from the dealer room with the first disc that Funimation had just put on sale that weekend. My friend popped it in and I will admit the first few minutes of the first episode are nothing but awesome. Before we even meet any characters we watch as a giant root gets into a fight with a giant monstrosity. The battle is intense as we watch the mecha, Django, defeat the creature with a pair of rapid fire pistols. It is probably one of the best first few minutes in anime history. Sadly it’s all downhill from here. 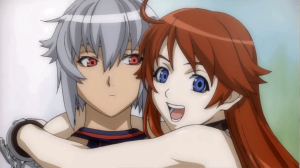 As the series begins we are introduced to Kyohei (you can just feel free to call him chef as his job is to cook for the rest of the characters and he has little character developments.). Anyways, Chef is hired to cook for a team of Mercenary girls all who are named after characters from the book little women. Unfortunately, none of the girls are nearly as developed as their classic literature counterparts and are instead bland enough to be downgraded to their job title. Sei is the business side of the operation, Jo is the muscle and pilot of Django, Amy is the hacker, and Meg is the hostage. No seriously she gets captured during almost every story line she’s involved in. More on this in a moment. Basically, chef is the normal one finding the operations the girls undertake to be too intense, but does little but sits on the sideline and watch as things explode around him. If you think I’m underselling the series you’re sadly mistaken.

One of the problems with the show is Meg. Like I said she gets captured every story line and despite having a real cool gun, she doesn’t do anything cool with it or defeat any of the enemies. She also doesn’t grow as a character, which makes the ending that much more frustrating. The biggest and most frustrating moments is the very end of the series, (YES, I am giving you spoilers as its for your own good), as it appears that Jo is gone, Meg says she will keep up the fight with the final scene being her wearing Jo’s jacket, Jo’s pistols, and a repainted Django. There was not enough development for the character for this ending to make any sense and the character is just plain annoying. 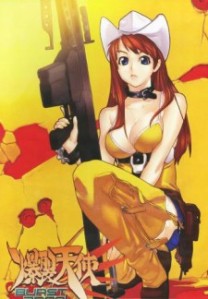 The mecha in the series Django is a pretty impressive robot with a nice cowboy look. Sadly it after the first fight in the opening things quickly goes downhill. Basically the impressive looking robot fights against a bunch of crappy generic monster of the week mechanical animals and poorly put together robots. Also, Django has no close combat weapons, which is a major flaw I see in all giant robots as close quarters weapons is a basic mainstay with all robotic arsenals.

When I did finally get around to watching this series was incredibly disappointing, especially after I had such a fond feeling from the first episode. I can’t tell fans enough that its just for the their best interest to stay far away from this series. I need to go watch a Gundam series just to watch the taste out of my mouth from writing this review.