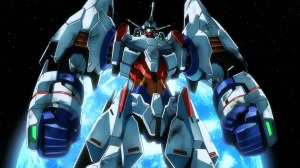 No it in no way is associated with Captain Planet. This is the latest series from studio bones who gave me two of my favorite mecha series, Rahxephon and Eureka Seven. Is this new title another must see new classic or does it fall plummeting through the atmosphere? Lets find out.

Daichi Manastu had weird memories of his childhood friend and a girl he met in a bubble. As a mysterious group of invaders known as he Kiltgang threaten to absorb all of earth, Daichi is given a strange gun known as a livilaster that allows him to channel immense power. Using this intense power he energizes the giant robot the Earth Engine to become Captain earth to save his childhood friend Teppei and the girl from the bubble known as Hana.

The art and look to the show are Bones’ usual high quality. The mecha designs for the series are also very interesting but seem to lack a specific quality that makes them unforgettable. They don’t have the distinct look that say Gundam or Evangelion possesses. I also question why the Earth Engine robot has arm blades in the toy version but never seems to use them once in the show. Also, compared to later suits the Earth Engine falls short in terms weapons and over all performance.

The characters are interesting enough but are not exactly ground breaking. I mean the series is fun and has some pretty good character moments but it doesn’t take deep into your soul, make you rethink your philosophy on life, or make you want to idolize these characters. The relationship between Hana and Daichi is heartwarming and you are routing for them to make it as a couple but they only develop just enough to say that they had something of a character arc, not that they each had an overwhelming moment that touches you deep inside.  Basically a few good moments here and a few moments there with some repetitive robot combing scenes in between.

The ending seemed a bit rushed once I reflected back on it. They took the time to gather all of the Kiltgang in an effort to take down the Earth (an objective that could have been accomplished by only one of their Mecha reaching the planet by the way) and when they finally are all together in a group, a new enemy appears so the gang doesn’t have the opportunity to overwhelm the heroes and finally absorb all of earth. I mean the enemy was there the entire time but the actual power he seemed to control rose greatly so the Kiltgang had not choice but to stop the larger opponent instead of focusing on absorbing all life on Earth. After all the episodes that were spend individually gathering the Kiltgang I really thought it would be a more intense battle between them and the Midsummers’ Knights in the end. Kind of a cop out but I won’t fault them too much for it.

In the end the series the only major crime against this show is that it is so forgettable. It is doomed to be another series pushed to the back of our queues because it doesn’t do anything as sadistic as kill a character every other episode or Master degree philosophy on what to has the characters talk about. To studio Bones I commend you on a good effort but sadly this one doesn’t make me wish I had a livlaster.