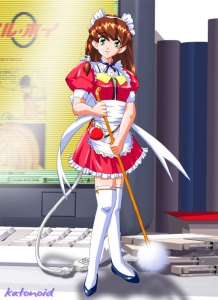 I have seen to error of my ways. No longer will I be a man who preaches about the joys of large monsters and robots. Instead I will talk about the greatness that of the miniature. I hereby rename this blog “The mini-project” and will make the necessary changes in the near future. That being said the first review will be of the anime Hand Maid May.

Kazuya is a young robotics student who is working on developing a squid robot known as Ikariya. When his rival sends him a virus bent on destroying his progress, Kazuya removes it but in the process orders his own small robot known as May. Together May and Kazuya work towards getting Ikariya built, dodging the efforts of the Cyberdyne Corporations (May’s creators) to get her back, and trying to keep away Kazuya’s rival, Kotaro Nanbara, who has made it his personal mission to mess up Kazuya’s life. What’s a guy and his pint size robot to do?

Though this aired after Love Hina in Japan it managed to beat it to America. This meant that American audiences got to enjoy it before Love Hina took off and we bombarded by so many other harem shows throughout the early 2000s. Kazuya is your standard “clueless guy” that all the girls like but at least he does manage to show some skill with his robotics work to help to pull the different robot girls out of a jam or two. May is also very cute and unique with her tininess and is a fun character to watch on screen. Kei is fun to watch as despite being a super genius seems to freeze up on ideas like “a pinch” or “a dash.” Then there is Kotaro Nanbara, the loud and obnoxious rival who can’t seem but be a glutton for punishment. Watching him continually fail is very entertaining indeed. 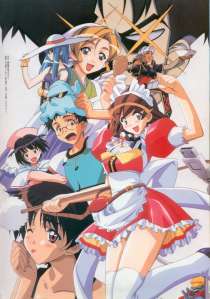 This was a fun little boy meets android girl storyline. Sadly it like many stories that came before it were forgotten when the titular anime in this genre, Chobits came out. Don’t believe me? Ask all those fans of Saber Marionette J who snuggle with their box sets at night. Of course, Chobits seems to be forgotten by many fans and there seems to be no other series that has stepped up and into the spotlight. Sure there have been other android girl series but none that really left a mark on anime fandom. I did start watching a bit of Busou Shinki because I had a fan that personally recommended the detail work that went behind some of those figures but I didn’t really make it past more than a few episodes. It was much more fun watching the antics of May and the rest of the Cyberdolls.

If you weren’t able to tell already this is my bad attempt at an April Fools joke. As long as I keep writing this blog Ill do a review of a series that focuses in the small and minute. Still the review stands for Hand Maid May. It’s a fun little harem show that makes you wish you could order a hand maid of your own.