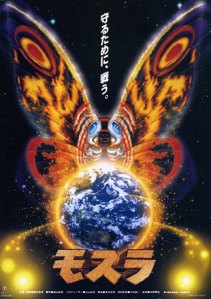 When Godzilla made first appearance in America the throne for the king of the monsters became empty. Two different contenders stepped up in an effort to prove their greatness by releasing trilogies. These two enormous titans were Gamera and Mothra. I have already reviewed the Gamera trilogy and how exceptional those three movies were but what about Mothra?

Picking up after Godzilla vs. Space Godzilla, Mothra has presumably saved the world from an asteroid that would have wiped out all life and has since returned to his island and laid a new egg. Elsewhere a construction company is tricked by a mischievous fairy named Belvera into released the ancient evil known as Death Ghidorah (I’m aware wikipedia has it named differently but that’s the name the version I saw used and I think it sounds better than Desghidorah). Working to stop Belvera plans is the twin guardians, Moll and Lora who summon Mothra to fight against this reborn terror. As the new born larva hatches he has no choice but to fight along side of its weakened mother to stop Death Ghidora from destroying all mankind. 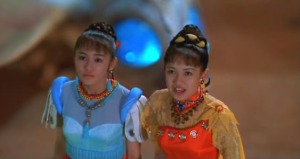 The characters for this outing are a mixed bag. I don’t really remember anything that stands out in the human characters of Taiki and Wakaba and are really only there so the Moll and Lora have someone that doesn’t know what’s happening to explain the situation to. The three Elias sister though definitely stand out. I’m glad that they didn’t have Moll and Lora talk in unison. That would have really gotten old fast. The fact that the two of them have to watch their sister, Belvera try to take down humanity and stop them is very touching to watch. I’d be willing to go to bat with other Kaiju fans to say that are the top runners for the best priestess Mothra has ever had.

Once again we witness a Mothra death scene but this one is probably one of the most tear jerking of them all. His Showa era death was pretty memorable with the Mother Mothra sacrificing itself to protect her egg but in this film we witness as the baby Mothra can do nothing to save its mother who is too weak to return home and collapses into the sea from exhaustion. It definitely is one of the most heart breaking scenes of the Heisei era of monsters.

One minor strike I can’t help but note against this series is Mothra’s genre. The movie makes it a point to express that the Mothra that is the center point for this trilogy is distinctly male, even given the name Mothra Leo once it hatches from its cocoon. What did they not think that a female monster would be able to carry the entire series. Come on Japan, that’s old school thinking.

The Rebirth of Mothra trilogy comes out swinging and delivers one of the Kaijus most action packed and heart felt outings. It also possesses my favorite version of Mothra, complete with lasers coming out of every possible surface. Unfortunately it’s all downhill from here. Unlike the Gamera where all three movies maintain a high level of quality through the series, the next two films are not as entertaining as this one. My advice is to just watch this one and walk away. Stay tuned for later posts where I will describe in detail how those movies don’t stack up.