There are many shows out there that start with one concept or genre and then do a huge turn into a completely different genre all together. This is a hit or miss strategy as sometimes you find yourself already enjoying the kind of story that was first being told and this new direction feels unnatural and makes you question if you really enjoy the show anymore. Believe it or not, there are times when adding a giant robot to the recipe is not the best idea.

Shun Ukiya is a boy with a very special gift. He is a gatekeeper, one who is able to create and channel the energy from Gates which allows a person to have extreme powers. Shun’s power, the power of Wind, allows him to defeated the sunglass wearing creatures known as Invaders and save his childhood friend Ruriko Ikusawa, who happens to control the Gate of Life. Recruited by the special group known as A.E.G.I.S. (Alien Exterminating Global Intercept System), who uses the powers of these Gatekeepers to fight against the Invaders, Shun works towards fighting for the smiles of tomorrow. 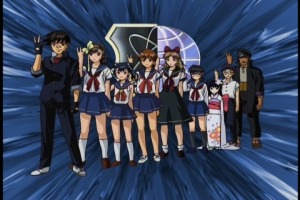 The different characters with their different gate powers are the real draw of this series. Like I said, Shun has the wind gate that allows him to shoot wind energy, and Ruriko uses a bow to send her life energy hurling towards the enemy, but the series also introduces Reiko (Gate of Illisions), Feng Fei Leng (Gate of Flame), and Megumi (Gate of Walls). Basically the show builds off the team using these powers to take down the enemy while at the same time discovering where they come from and dealing with personal problems. Standard stuff really. 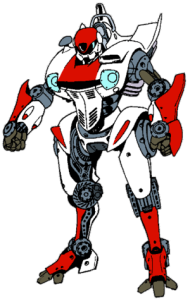 Even though this show technically qualifies for the blog with the giant monsters that the Invaders form on a regular basis but it also does have a robot in it. The robot is one of the more interesting aspects of the show as it has an engine in it that allows the driver to increase their Gate power, but also has a steering wheel for its controls. I know steering wheels as controls is nothing new but it doesn’t come up as often as you would think it would. I thought it was cool at least.

People are quick to accuse this series of suffering from the “Gonzo effect” but I quickly disagree. The “Gonzo effect” for who are not aware is a trend associated by Studio Gonzo who became infamous of having great episodes to start the series but by the end of the series there is a distinct drop in the art quality. I personally feel that this series doesn’t suffer from said effect and stays at a decent quality for the entire series. Had the podcast that reminded me of this affliction (Anime World Order. Check them as they do really good discussion on Anime) mentioned it sooner, I would have introduced the concept of the Gonzo Effect during my Burst Angel review. That show had a glaring drop in quality an story telling after the first episode.

I remember loving this series back in the day and grabbing every new DVD as soon as it came out. As I look back though I realize that despite how much I enjoyed it I haven’t gone back once to rewatch it. It wasn’t really a bad series. It was entertaining to watch the characters use their Gate powers to defeat the different Invader creatures of the week that would often form together around a red suited invader and form some giant monstrosity that would tear apart the city. Its another show with a formula but sadly it doesn’t add enough to it in order to make it more than just a fun ride. You watch it, you may get a favorite character or two and that’s it.  Heck there isn’t even really that much merchandise for you to track down if you find yourself becoming a die hard fan of it. This was a good series that sadly became forgotten by the fans but I really can’t chastise them for forgetting it. Gate closed.

P.S. I know this was based off a video game, but I never really tried to track it down or play it to make a comparison. This is a review for the anime by itself.