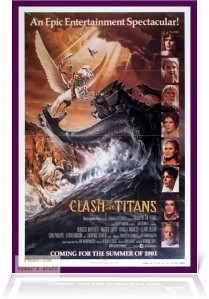 I was originally on the fence on whether to write this review for the blog. I questioned if it really fit into the general message of “all things big” that I set for myself. Eventually I realized that this film has one of the most iconic American giant monsters in it and was definitely one worth talking about. I present to you dear readers, the epic known as Clash of the Titans.

The young son of Zeus, Persues grows up unaware of his heritage. It is only when he falls in love with Andromeda, a cursed princess that his world turns upside down. Now to protect the woman he loves from the behemoth know as the Kraken, Perseus must journey across the globe and back to obtain the head of Medusa, whose stone gaze is the only thing that would slay the unstoppable beast and save Andromeda.

The greek mythology and more adventurous tone to the movie is what threw me off. Once you break the down the plot it becomes incredibly clear how much of a Kaiju storyline it really is. The hero is introduce, the giant monster attacks, the hero develops and tries to find a why to stop the monster and a final showdown occurs between the hero and he monster. That’s the basic recipe with a Kaiju movie but its what is added to the recipe that really makes it some movies stand out from other. The secret ingredient in this film: Ray Harryhausen. The special effects master brings his trademark stop motion animation in full force and showcases creature not easily replicated or reproduced (yes that was a jab at the remake). The Kraken looks imposing and deadly from the first moment he is on the screen. Of course the first moment he is on the screen he is destroying an entire city so it really reinforces his look. 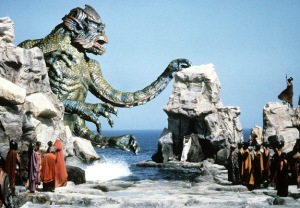 Persues is a pretty good hero to watch fight against all the incredible monsters that appear in this film but I would be in the wrong if I didn’t mention Bubo, the robot owl. This cute little guy is the unofficial mascot of the movie and serves to lend aid when he can to the team. I remember watching this movie and thinking, man I’d love to have a Bubo of my own. I wonder if they make replicas. Also, there’s Pegasus the winged horse. Not much of a fan but I know winged ponies are all the rage today right people?

This film remains a classic that any Kaiju or just movie fan needs to see sometime in their life. The special effects truly are intense and will help someone to truly see the joy that can come from stop motion animation. It’s also one of the most well know interpretations of Greek Mythology on film. More recent generations probably would know the Disney animated Hercules movie more, but I’m pretty sure I should stay away from that one. Or should I? Let me know in the comments.