This is going to be an extra feature on this blog. I’m going to try and put it on a separate day from the reviews to make it special. These will only come once in a while though as they take a big longer than my reviews to get through. Still, I feel these are perfect to place here on the blog.

I’m a big fan of the Gundam franchise. I know I haven’t been posting any reviews of this series yet, but trust me they are coming. I actually have something special planned. And as any true fan of Gundam, I found myself getting into Gunpla (the name for the plastic Models associated with the series). Originally I thought I had put this aspect of the fandom away for a while and hadn’t built a model in many years. Then I saw Gundam Build Fighters and it made me remember the fun of working with Gundam Models. I am now back in gear, planning and obtaining new projects to work on.

Still, before I get anywhere and making any new pieces I have decided that I would showcase the efforts of my past. See back in the day there was no one to show me the proper way to build any of these creations and all the instructions were in Japanese (thanks for that one Bandai). To this end I usually just broke off the pieces from the plastic runners and put the pieces together. As you can see from the pictures, my work wasn’t exactly display case worthy.

To best showcase my point, I would to display pictures of one of my own creations. To that end I give you my build of the ZGMF-X10A Freedom Gundam from Mobile Suit Gundam Seed:

The work isn’t terrible but once you get up close and really look it it the defects really stand out. I didn’t even give the suit a matte coating, which I know now really helps to make the suit look so much better. 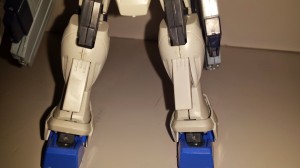 As get up close there is a lot of minor errors that add up to making the entire thing look like crap over all. Bits of plastic left over from removing the piece from the plastic runners (which other internet sites seem to call nubs but I personally refer to them as BURS). Pieces not fully pushed together resulting in a the suit looking as if it were about to slit open. That’s before going to the paint job. 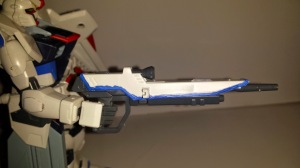 The paint on the eyes is not nearly as bad the detail work that was done on the rifle. I’ll definitely have to work on that. Still both of them are not really worth showcasing with pride, especially now that I know different tips and tricks to make the work better such as shading and line drawing.

It was only after watching Gundam Build Fighters that I actually took the time to look at the other model work that could be done and the different steps and techniques that a person could use. That is why I’m using the Freedom here as a mile marker to show where I am now and how I will improve as I keep working with my craft of Gunpla making. Also, there is the small problem that my other models were not properly stored during my last major move and they currently not in the best of condition. Still, gives me a lot of spare parts to experiment with on a road to greatness. Or least a less suck showing then this.