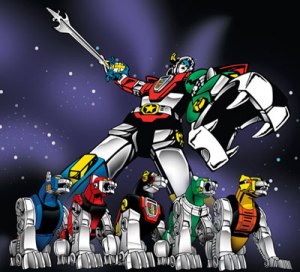 I’m going to go retro on this review. I mean really retro to the point that this anime came out before a lot of people who read this were even born. This was one of the first animes I ever saw and it became a classic to many. Americans recognize it more under the name Voltron: Defender of the Universe. Though I’ve seen a great of the American adaptation I will instead be looking at the original anime, Beast King Golion.

After they return to Earth and find it destroyed, 5 explorers (who go by the nicknames Chief, Quiet, Moody, Shorty, and Hothead) get captured by the evil forces of the Galra Empire. Escaping to the planet Altea, the 5 five find a castle and the planet’s ruler, Princess Fala. Entrusted the keys to the five robot lions by the Princess, the explorers set out and fight against the invading forces of Galra. When they need more power, the lions combine into the ultimate warrior, The Beast King Golion. 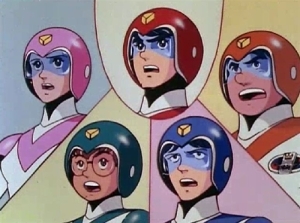 I’m taking a different approach with this show and I’m gonna focus more on the steps to adapt this show for an American Audience. On the plus side, the original has a few things going for it. First off there is death. Quiet (Sven in the original), that monster that Shorty (Pidge, who had the worst adaptation name ever) befriended, and even Lady Hys all buy the farm. This really raises the stakes of the battles they fight. Also there is no Galaxy Garrison as this was an added feature that would later be used to connect the series to the Vehicle Voltron Series (originally known as Armored Fleet Dairugger XV). The Garrison isn’t needed as the team was originally just explorers who came back to and found earth destroyed by the thermonuclear war. The human race destroyed itself and the bad guys just happened to show up to collect anyone alive for their entertainment. Also the team gets to watch Earth get destroyed. Sorry Earth. You had a good run.

The are some negative aspects that were changed by the shows conversion when it came to America though. For starters the company added some songs. The original anime used the opening song (which was lacking to say the least) over and over again, especially when the robots combine. meanwhile, Voltron was overflowing with 80s synthesizer goodness. Also, the voice over during the combination is not there and feels missing with it. I found myself saying “Form Feet and Legs” as the fusion took place. Its a small missing piece but give that it happens every episode it becomes very noticeable.

The robot is iconic even to this day. Made up of five lion robots each powered by a different element, these machines come together to form an impressive warrior. Seems like every other episode this combined machine is pulling out a new weapon or power. Still, to finish the monster of the week off, Golion forms the Juoken (10 Kings Sword) aka the Blazing Sword to slice the monster apart. This is cool but can get a bit old considering its the only finishing move used and it almost never fail.

The series does get a bit repetitive but still there is something to enjoy here as long as a person can get over the aging animation. Still, I can understand where people would be hesitant to come back to this show. Without my nostalgia for the series I found myself finding it difficult to keep watching. Somethings just aren’t as awesome as we remember them.