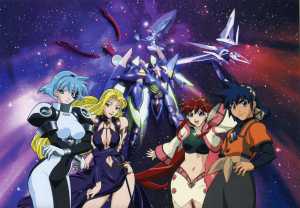 Animes that have a lot of hype on their initial release but then fade into obscurity are not uncommon at all. Its a little surprising that this show has seemed to go that way as it had a huge fan following when it first came out. Still, its not exactly an essential series when it comes to Mecha so I guess I can see why it had that effect. It is worth discussing though so let’s dive in.

Men and women are from different planets and are at war with each other. Hibiki is a low class laborer who wants to prove himself to the rest of his fellow workers. He sneaks on board the latest warship to steal a Vanguard robot but the ship is attacked by women. In the course of the battle, the two flagships of both men and women fuse and are transported away. Now Hibiki has not choice but to work the alien obsessed Dita, the cold Meia, and flirtaous Jura and combine his Vanguard with their Dread ships to create Vandreads.

The interactions between men and women that treat each other as aliens offers some very entertaining moments. Dita is cute with her quirk of calling Hibiki “Mr. Alien” and its adorable to see the two of them grow closer. The side romance between Duelo and Parfet is also interesting to watch but sadly they never get a really good romantic moment (not even in the second season). The series does well to showcase that it takes a combination of men and women working together to truly succeed in life.

The robots in this series are interesting but could have had a better focus. There really isn’t any data files or show moments that showcase each of the different Vandread’s full abilities. Instead each of the three has a generic specialty such as offense (Dita), defense (Jura), and speed (Meia). I personally prefer when a robots abilities are established rather than being able to pull out a special move from thin air as the situation dictates. Sadly they never thought to make technical specs for this series so each robot basically has the ability to do what it needs to when the story requires it.

Again I won’t make the claim that the Gonzo effect is in place here. The series starts and ends on a good note with little in terms of a decline in quality of the art. This is probably right before Gonzo started to cut corners and work on getting the most anime out on as little budget as possible.

So that’s Vandread, or at least the first half. Fun bit of romantic comedy mixed with giant robots. Its worth a look but I wouldn’t spend hours trying to track it down or anything.