Sequels are often stigmatized as not being as good as the original films and series they were based on. This is often a disservice to these films because they still have a lot of entertainment to offer the viewer. Today’s sequel is another example of one that is looked at as being inferior but simply dismissing it as such would in discrediting a pretty decent film on its own.

Taking place right after King Kong, Carl Denham is hounded by the authorities who want him to pay for the destruction and carnage Kong caused. Escaping with Captain Englehorn ,the two dock in a port and meet a girl named Hilda who joins their group. The trio then runs into Nils Helstrom, who gave Denham the map to skull island. Helstrom claims that their is a treasure on the island ready for the taking. Thinking this is great idea, Englehorn, Denham, and Helstrom sets out to Skull Island not knowing that Hilda has decided to stowaway on the ship. On Skull Island they will meet the heir to the Kings throne, the Son of Kong.

The problem with Son of Kong isn’t that its a terrible picture by any means. It just doesn’t have as high a level of production and story as the original. This is due to the fact the sequel was released within nine months of King Kong`s release. The stop motion was put together in a hurry and it shows. The movie also showcases more comedy then the first movie. The lack of time to truly polish this film to its full potential is probably why some can criticize it so harshly.

The human aspect is one of the better parts of this film. Improving on the cheesy dialogue between the romatic leads in the first film, Denham comes off as a guy who is sorry for what he has done and is looking for redemption. Once he meets Son of Kong he feels bad for getting Jr.’s dad hurt and treats the creatures wounds. He’s a man looking for redemption and really hopes he can obtain it if he can just get the treasure. 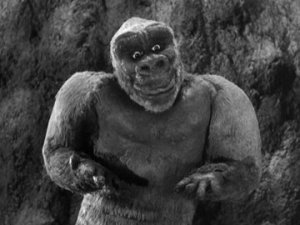 Son of Kong himself does offer some aspects different from his old man. Sporting white fur and being much smaller in size than Kong, the son is also much friendlier than his dad was. Kong Jr. makes a quick connection with Denham and Hilda and is willing to protect them from the horrors of Skull Island. The ending scenes with Denham and Kong Jr. will leave a lasting impression on all who watch this film.

Though not an essential film to watch to be a true film buff, Son of Kong still offers a lot for fans of giant monster movies. If you happen to find it playing late night on AMC or during some Halloween movie marathon then give it the time and attention it deserves. The son may not be as good as the original but it is not a bad movie in the slightest.