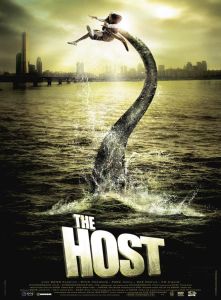 Have you ever had a film or show that everyone else was adamant about but you just really couldn’t get behind. The one movie that everyone insists is the greatest thing ever but your just sitting there with your head cocked to the side saying “Really? I’m just not seeing it.” This is my experience with The Host. A film that everyone else seemed to love but I really didn’t enjoy that much.

Park Gang-du is a dim witted individual who works a snack stand with his father near the Han river. Thanks to a chemical dump six years prior, a monster has been created that grows from the river, attacks the city, and captures Park’s Gangdu’s daughter, Hyun-seo. Now, Park must chase down the monster with the help of his father, brother, and sister in an effort to try and save Hyun-seo before the monster consumes her.

The cast is interesting to say the least. Park is stupid, Hee-bong (the father) is keeping the family together but is kind of a jerk himself, Nam-joo (the sister) is an archer, and Nam-il (his brother) is an alcoholic. Its weird because they are terrible characters individually but as a group you find yourself routing for them as they come together to track down a missing member of the family. There is a real emphasis on the bond of family and trying to survive which no doubt helped to win the viewers over. Personally though I could take or leave Park’s dim witted nature. 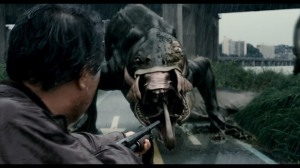 The mixture of comedy and drama is off in this film. Moments that should be tense but have a joke appear seem awkward and forced. One of the best examples comes as the scientist enters the room in a hazmat suit, full of confidence, and one second later slips on the floor and almost falls. What was that? That little joke made everything else that the scientist said afterward have less severity. There are far too many moments like this in the film.

The plot line about monster being able to spread some kind of disease seems unnecessary. Its really just there to force the fact the government will contain, quarantine, and militarize at the drop of a hat. It feels irrelevant when the government has a giant freaking monster to fight with. Its not like Cloverfield where the monster’s influence is causing people to explode from when they get bit. The whole thing just seems forced and making a statement which should have either had more emphasis or be taken out entirely. 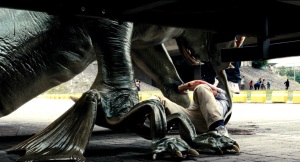 My obvious lack of attachment to this film is why I disagree with the majority of the critics who seem to favor it. The Host has an insane 92% on rottentomates.com and I really just don’t feel like it deserves it. Its moments seem uneven and not well developed while at the same time containing a cast which I didn’t really care if they lived or died. I have no plans to rewatch this film and I really can’t recommend others watch it as well. This is one monster I wish would have stayed in the water.