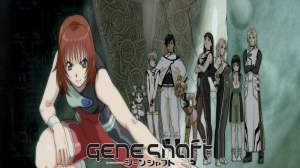 What happens when a show focuses more on character designs and its heavy handed message over the fact that they have a giant robot they can pilot? You get a show like Geneshaft which presents a future with giant robots that I don’t want to be a part of. It should be obvious that if a fan of mecha writes that and the series doesn’t involve aliens bugs crushing humanity then the show probably isn’t going to be good.

The world has become ruled by genetic engineering and woman outnumber men. Mika is a young woman with a white gene type and thought to be inferior by others. In order to fight a mysterious alien race known as The Rings, a ship called the Bilkis has been tasked to investigate them. Mika becomes a member of the crew but has to deal with the fact her captain’s actions resulted in the death of her friend.

The first main problem with this series is it bites off far more than it can handle. The series deals with topics such as selective gene manipulation and what type of society these actions create. This could have been the focus in a series by itself but then issues such as people devolving into beings with less emotion who don’t feel attachment because they can easily be cloned back to life is also thrown in. These subjects are dealt with in a 13 episode series where there is a giant robot and an enemy alien race trying to destroy Earth. This is far too much to handle in such a short amount of time.

Another major problem is the show has no “outside man.” There is no character to look at what is going on with this advance society and say how mixed up it has become. There is an episode where characters from the past are transported to this future, make the claim of how strange the society has become, and then disappear by the end of the show like it never even happened. Again, this could be the plot of the whole series but they use it in only one episode and don’t address it the rest of the show. 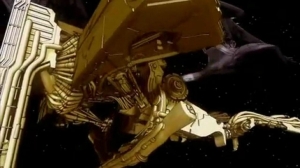 Now the flaws of this series could be redeemed if it had superior designed robots and outstanding mecha battle scenes. Sadly it doesn’t. The Shaft (a perfect description of the overall design of it) is a bare bones robot with one large cannon in its chest and that’s about it. The robot is plain metallic grey color (the photo is from a later episode when the Shaft is reacting to one of The Rings, which is why is gold) and looks like it is a wire frame bare bones model design no one took the time to go back and fix after they wrote the original idea down on paper. That’s what this feels like, a half finished product that no one took the time to correct and polish to make it any better or worse then the finished product.

This show really didn’t need a giant robot. It should have just had a crew of people going out into space with someone who was cryogentically frozen to awaken from the past to look at the bland and calculated way of life society has become and express the importance of feelings such as love and compassion. Because if the characters can’t get caught up on attachment and are working to repress emotion, why should the audience be expected to attach any feelings of their own?